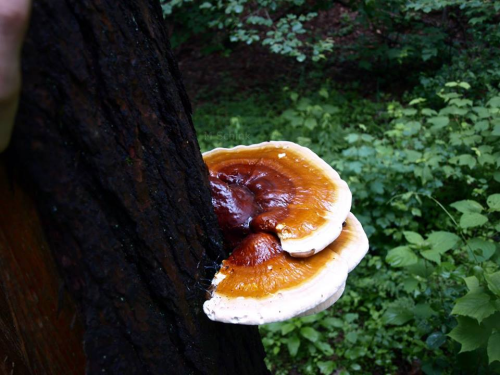 
Reishi (or Ling zhi) can manifest in various colors and forms, but the most common are only stems (called antlered) or stems with a kidney shaped conk on top. The common coloration is dark red to brown and characteristically a white or yellow new growth zone at the edge. G. lucidum typically grows on hardwoods whereas G. tsugae likes hemlocks. However, Stamets (1993) noted that G. lucidum will readily grow on evergreen medium in cultivation. Ganoderma species are white rot polypore fungi which invades dead and dying trees. Both species of Ganoderma are found growing wild in the northeastern United States and are very difficult (if not impossible) to tell apart visually.

Reishi is called Ling Zhi in China where it has been used for thousands of years as a powerful medicinal mushroom. Studies have shown reishi to enhance the immune system, to combat tumors and have protective action. Rogers (2011) notes the wide range of medicinal benefits and reishi’s similarity to ginseng as an adaptogen. 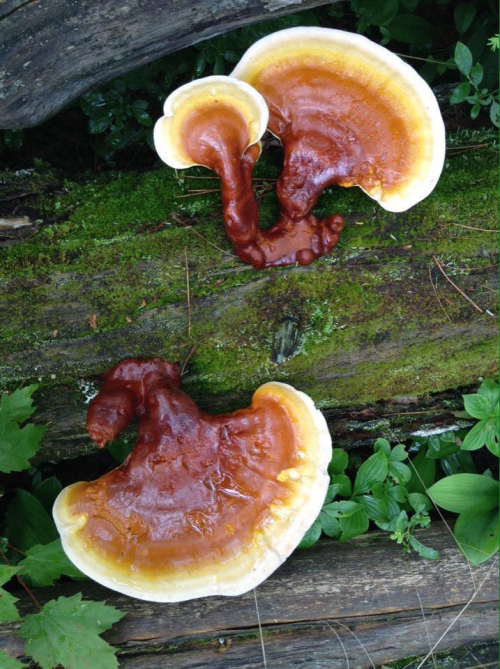 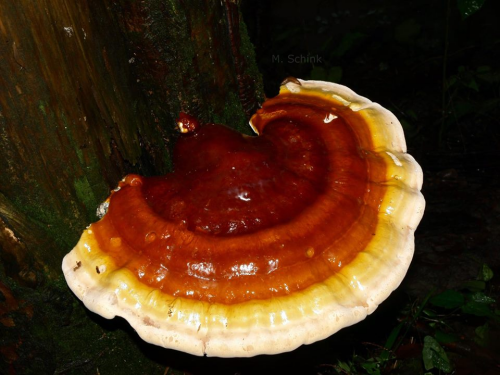 Because of the visual similarities and geographic overlap of G. lucidum and G. tsugae in the United States, the question becomes whether or not it matters which species one uses in preparations used medicinally. Based on my own research (some of which is outlined below), I would be very comfortable completely dismissing the question entirely.

There are a host of Ganoderma species of mushrooms which are often referred to as “reishi.” The standard bearer is Ganoderma lucidum and most medical studies have identified this species as the one they have used. However, there are some studies being done with G. tsugae also and the results are just as promising as those of its very close relative G. lucidum. In fact, there are questions as to whether the two types of Ganoderma are actually separate species.

Paul Stamets –a well known and respected mycologist- suggested G. lucidum, G. curtisii, G. oregonense and G. tsugae are so closely related and similar that maintaining they are separate species is “primarily ecological and host specific and not biological” (1993, p. 357). Hobbs (1995) noted that G. tsugae was one of the major species of Ganoderma being cultivated in Taiwan and that it had similar constituents as G. lucidum which were connected to successful animal studies. Moncalvo (2005) referred to the complexity and lack of micromorphological distinctiveness in the Ganoderma mushrooms. He went on to point out that the reishi mushrooms “reported as G. lucidum in most of the pharmacological and phytopathological studies were wrongly identified” (p. 353). In fact, many of the strains grown in Asia for health and medical related use are not G. lucidum and actually include many distinct Ganoderma species (Moncalvo, 2005). Confusion in identification and labeling of the Ganoderma mushrooms was also shown by Hong and Jung (2004). In their study, they used rDNA to group similar strains of Ganoderma. The Asian G. lucidum group included six species from Japan and Korea, and one identified as G. oerstedil from Argentina. The G. tsugae group included three species identified as G. lucidum, four as G. tsugae, two G. oregonense, two G. valesiacum and one G. oerstedil. The origins of the G. tsugae group in Hong and Jung’s study were primarily the United States and Canada, but included species from the UK, France and Argentina. Moncalvo noted that most reishi labeled as G. lucidum from North America are very similar to G. resinaceum from Europe. Further that “G. tsugae in North America is genetically very close to the ‘true’ G. lucidum from Europe” (p. 353).

What all that means is whether the reishi used in an extract is Ganoderma lucidum or Ganoderma tsugae, there is no reason to believe generally that it would work any differently. With scientific evidence suggesting that reishi strains used in clinical trials labeled as G. lucidum potentially being misidentified, and the closeness of G. lucidum and G. tsugae evidenced in the literature, it would seem that one could arguably interchange the two species with no negative effects.

Rogers, R. (2011). The fungal pharmacy: the complete guide to medicinal mushrooms and lichens of


We use both alcohol and water to extract the most beneficial substances from the raw material. Hence, a double extract. We first extract over time (at least a month) in alcohol. We then normally do three water extractions on the material after we remove the alcohol extract. The water extracts are then reduced to a similar volume as the alcohol extract. The alcohol and water extracts are then combined to provide a robust extract product that consists of approximately 25% alcohol by volume. After combining, the raw extract is then allowed to rest to remove unwanted sediments. The finished extract is then packaged in new bottles, labeled, and sealed to be tamper proof. 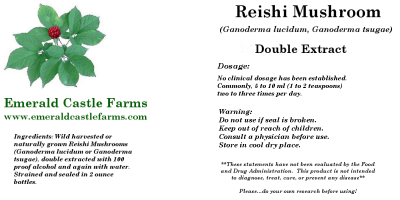 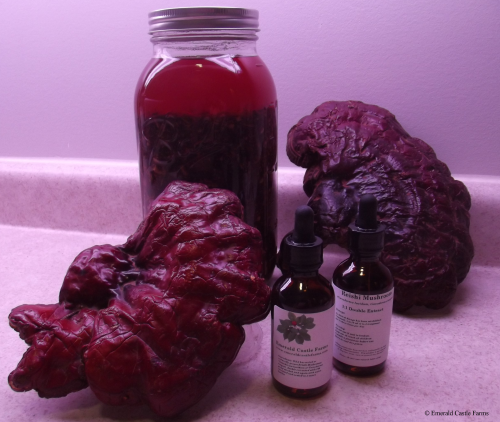 About Reishi and its Benefits

When I started working on the reishi research to create this page, I was once again stunned by the fact that more people are not aware of the documented healing properties of this medicinal mushroom. I felt the same way when I put the chaga page together. In the research listed below, I found that not only has reishi been used for thousands of years as a medicine for nearly everything, but the scientific studies are proving the folk lore surrounding this highly useful medicinal mushroom. From promoting health and longevity in China to fighting HIV and cancer to protecting liver and kidney tissue from exposure to heavy metals, reishi is proven to be an effective weapon for improved health. Numerous studies have found anti-cancer and anti-tumor effects using reishi. For example, Liu, Yuan, Chung and Chen (2002) found that a preparation from reishi inhibited three types of tumors from 80-90%. Please keep in mind that I am not making any claims of any kind. These statements have not been evaluated by the Food & Drug Administration. These products are not intended to diagnose, treat, cure, or prevent any disease. I am only sharing my research with you -which is referenced here on the page.

While I could go on and on page after page citing scientific studies which show the health benefits of reishi, I don't have that kind of time. Additionally, I think it is important for you to do your own research before adding any dietary supplement or medicinal agent to your routine. However, I've done some basic research and listed it below to get you going.

Within your research you should find a few precautions for the use of reishi. Reishi has an antiplatelet effect, so don’t take reishi if you are on anticoagulants or antiplatelet drugs without consulting your doctor. Likewise, reishi tends to reduce blood pressure and may interact with blood pressure medications. Consult your doctor if you are taking blood pressure medications before taking reishi. Reishi enhances the immune system response, so don’t take reishi if you are taking immunosuppressant medications. Since reishi can increase antioxidant capacity in plasma, it might interact with some chemotherapeutic agents. If you are being treated with chemotherapy, consult your doctor before using. And specifically reishi constituents may have inhibitory action with Cytochrome P450 substrates which may affect the concentration of these drugs. Don’t take reishi if you are taking Cytochrome P450 drugs without approval of your doctor.

As with any natural substance, these products cannot be patented. As a result, the big pharmacuiticle companies have nothing to gain in sponsoring human clinical trials to prove these natural substances work. The United States Food and Drug Administration requires specific compounds with proven specific modes of action before they will approve any medicinal substance. In the case of plants and fungi, this is difficult because they are made up of sometimes thousands of different constituents. Sliva et al. (2002) wrote in part "spores and unpurified fruiting body of G. lucidum inhibit invasion of breast and prostate cancer cells." Some studies -such as Weng and Yen (2010)- tend to give the impression that trying to pick apart the constituents of these natural compounds reduce their effectiveness.

Scientific studies have shown positive results in vitro and in animal studies. In a few cases, reishi has even been tested in human clinical studies. Below are a few specific areas noted in the studies where reishi shows positive effects. Keep in mind, this list is based only on the studies mentioned on this page and are listed in alphabetical order: By no means is this an exhaustive list of the studies done with reishi which suggest positive benefits.


Here are a few helpful links to get you started:


Some scientific studies with reishi